The Things You Should Know About Street Art in Advertising - 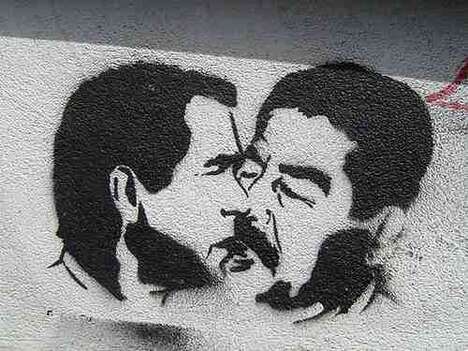 Street art in advertising has become the new medium for brands to get their message to customers, even though a decade ago this form was used to critique the very institutions it now represents. How did this happen and what can brands do to learn from this merging of counterculture with the mainstream?

In the 1950s and 60s, advertising was much more controlled and centralized. During breaks from one’s favorite television show, families everywhere would be exposed to the latest Kellogg’s commercial or Old Spice aftershave ad. When the switch was turned off and bedtime hit, there were no computers to turn on and YouTube commercials to stream. Men woke up and went to work, driving past the occasional billboard, but ultimately consumers could separate a piece of art from an advertising pitch.

With the advent of the Internet and advanced technology, the world of public and private spheres was merged, making it harder to separate one’s work world from personal life. Technology made the world much more accessible, but at the same time pervasive, as email allowed one to be readily available at all times. This pervasiveness can now be seen in advertising methods of today, with websites running off advertising revenue flashed before a viewer’s eyes without one even noticing. With so much stimuli being thrown at consumers, many individuals simply stop paying attention.

According to The Journal of Advertising, “Street art has the visual and cognitive effect of commercial advertising, and many of its brand dynamics, but carries messages of enjoyment, ideological critique, and activist exhortation rather than of commercial consumption.” The public has become fed up with this pervasion of privacy that most commercial forms now take, but they still enjoy the natural beauty and entertainment value that street art has to offer. By appropriating this form, advertisers and brands can promote their products under the guise of public-produced artwork. Moreover, this form is associated with illegal conduct, adding to the sense of intrigue and mystery behind the message.

Trend Hunter has seen the rise in these methods, with PRO trends such as Street Artvertising and Digital Graffiti. The Alex Seo Crisis Campaign is an excellent example of how street artvertising was used for social good. Subtle outlines of the human form were drawn on the streets of London and New York to shed light on the rising numbers of homeless people. The eerie images drew in consumers and raised awareness over the issue, all through using simple chalked outlines.

Brands looking to engage their audiences in a non-pervasive, yet effective manner would benefit from examining this street art in advertising movement. By using the power and publicity street art has received in the past, this form of promotion can have more of an effect in the long term than a one-minute commercial. As the business section in The Atlantic states, “No one likes to think that they are easily influenced. In fact, there is plenty of evidence to suggest that we respond negatively to naked attempts at persuasion.” Subtlety is key, so what better way for brands to promote than through advertising disguised as street art produced for the people, by the people?

For more information on street art in advertising, check out our Branding Trend Report.
References: trendreports