The Rise of Aggressive Marketing Strategies 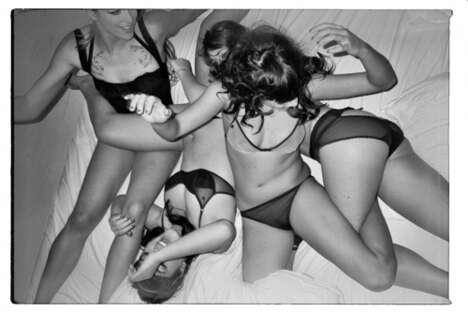 With the number of promotions and advertisements consumers see on a daily basis, aggressive marketing strategies allow brands to solidify their image in the minds of viewers, and achieve immediate recognition. According to the Journal of Broadcasting and Electronic Media, “sex and violence are found frequently in promotional materials because they are believed to lead to increased excitement and interest.” Combative elements in promotional videos and ads can help induce these feelings, and allow brands to sell products based on these higher emotional states.

Fashion is one industry that has followed this ethos in an array of campaigns. Take The Wrestler Esquire Magazine editorial shot by Philip Toledano for example. This relatively clean-cut feature shows a hefty fighter about to deck a prim and proper model wearing stylish shorts and blazers along with dress shoes. Although the campaign doesn’t demonstrate outright violence, the anticipated threat lures viewers in to see what happens next, and subconsciously acknowledge the immaculate designer pieces in each and every shot. It is this ability to hook onlookers that give aggressive marketing strategies a leg up on other methods.

Aggressive imagery in film has been attracting viewers for years, but the last decade has seen movies go from a singular installment to an entire film franchise grossing millions of dollars. Movies such as Saw and Final Destination are just two examples of how consumers build a connection with a brand of film, and keep coming back for more. To date, Saw is one of the top ten highest grossing horror film franchises with a total of seven films and a television spinoff. The films have made almost $350 million dollars –- not bad considering they all follow the same plot line.

Clearly fans love the psychological and violent thrills these movies have to offer. In today’s competitive marketplace, this is exactly the type of relationship brands must build with their customers in order to stay relevant. Although the gruesome images seen in the aforementioned films may be pushing the boundaries when it comes to appropriate advertising, the suspense and aggression conveyed can still be achieved in marketing and not be completely banned from the airwaves.

To learn more about aggressive marketing strategies, you can check out our Marketing Trend Report to see what companies such as Vogue has done to stand out. The Pop Culture Report is also beneficial to examine current movements in the world of film and the Internet that reflect this craving for rambunctious imagery.
References: fashionising, trendreports