Eco-Friendly Economy: Why the Urban Commuter is Garnering Attention 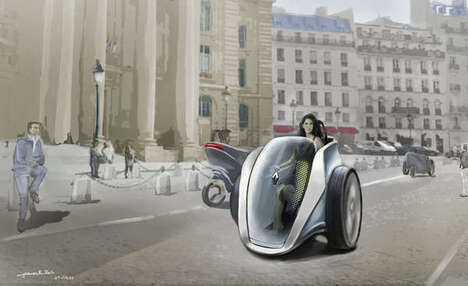 The world is more focused on the environment than ever before and the urban commuter is gaining market share at an accelerated rate, which makes it a lucrative demographic to tap into. An urban commuter can mean any one of a plethora of things; those that drive in from the suburbs, motorists that travel in-city or one that’s a mixture of both. What’s important to note about these modern urban commuters is that they’re looking for better ways to get around and it’s this attention to infrastructure that they’re drawing that’s key.

City life is undergoing a distinct tide change where a move towards smaller, more efficient means of living is valued more than the standard. As such, vehicles are getting smaller to help beat traffic congestion and housing is shrinking to be smaller than ever before imagined. It’s these notions that are of central focus in Trend Hunter’s PRO Trend Compact Commute, which strikes a chord with the modern urbanite that’s living more efficiently, smaller and with less waste than we’ve seen throughout the past fifty years.

As the infrastructure of city centers evolve to accommodate more urban commuters opting for smaller vehicles, to walk rather than drive or cycle, more businesses are adapting to this more locally based economy. Trend Hunter’s PRO Trend Eco Delivery discusses how courier services are coming back into the equation and delivering goods of all kinds to local inhabitants to better decrease dependency on shipped goods and carbon-emitting vehicles. Moreover, it’s this focus on the bicycle and small electric vehicles that will dominate the streets in the future rather than traditional vehicles, which is why adapting to the shift and marketing to the demographic can yield immensely positive results.

Check out Trend Hunter’s Eco Trend Report for more information on the cutting-edge innovations taking place that leave a smaller impact on the Earth than traditional transportation and are becoming more for urban life.
References: trendreports, trendreports