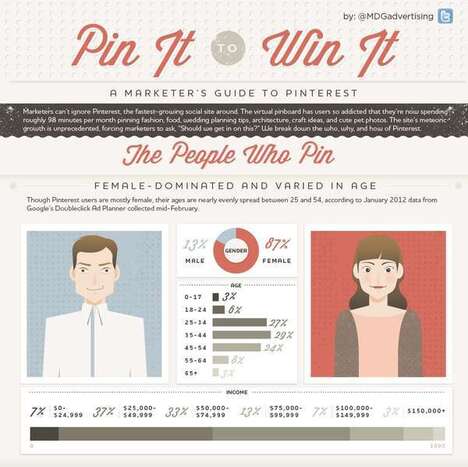 Having grown tremendously since its inception in 2010, Pinterest is now ranked third (just behind Facebook and Twitter) in terms of total visits and is beating Twitter in referral traffic, so it's no surprise that brands the world over are scrambling to use Pinterest in marketing their offerings. While some organizations remain confused as to just how to use the visual-oriented social media site, others are racing ahead of the game and coming up with creative strategies and campaigns that demonstrate how powerful the use of Pinterest in marketing can be.

Trend Hunter has featured several notable examples of innovative and exciting Pinterest campaigns that might inspire your brand. These campaigns go above the simple act of pinning of a brand's products (which, without an overall purpose or goal, can mean zero impact on web traffic). For example, using Pinterest as an engine for an interactive contest allowed Jetsetter to boost its referral traffic by 100 percent and its pageviews by 150 percent. The brand's 'Pin It to Win It' contest encouraged Pinterest users to create their own pinboard of "the ultimate destination" to win a three-night stay at a Jetsetter destination. The contest also awarded the user with the most followers on his or her Jetsetter board with a $1,000 Jetsetter credit, further compelling users to share their pins with online friends.

Elizabeth Arden, on the other hand, used Pinterest to further a social cause, asking users to help in its philanthropic partnership with the Look Good Feel Better organization. The cosmetics brand asked Pinterest users to use the hashtag #PinItToGiveIt; every time it was used, the brand donated a beauty product to a woman struggling with cancer. This example illustrates how a company can use Pinterest for philanthropic goals and to build awareness of a social issue while at the same time create a positive position in customers' minds.

Another example of a unique Pinterest marketing campaign is the UNIQLO Dry Mesh Project. The clothing brand effectively "hijacked" Pinterest's most popular categories by having a team post scores of images featuring UNIQLO's dry mesh shirts, its logo and other eye-catching images in a certain order. This campaign managed to grab the attention of users as they scrolled through their favorite Pinterest categories, effectively jolting them from their "scrolling slumber" and create awareness of the UNIQLO brand.

While using Pinterest to actively engage an audience can be difficult, it's entirely possible, as the automaker Peugeot proved in its recent Pinterest Puzzle campaign. The auto brand created tagged Pinterest boards featuring its products and designs but the boards had missing pieces, which participants could find by perusing its Facebook and Twitter pages. In addition to creating engagement by rewarding the puzzle solvers with prizes, this campaign also effectively brought together the brand's other social media channels, creating a unified social media branding experience.

There's no denying that using Pinterest in marketing may be an effective way for brands to grab the attention of online users. What's more, research shows that Pinterest users spend more time on the site (in January 2012, users spent an average of 89 minutes each) than on other popular social media, such as Twitter, where each user spends only about 20 minutes on average.

To find out more about how Pinterest is changing the social media marketing arena, as well as to uncover other innovative ways brands are using Pinterest in marketing, make sure to download Trend Hunter's Social Media Trend Report and visit our PRO trends database for trends like Virtual Collaging and Curious Contest.