The Value of Out-of-Home Advertising 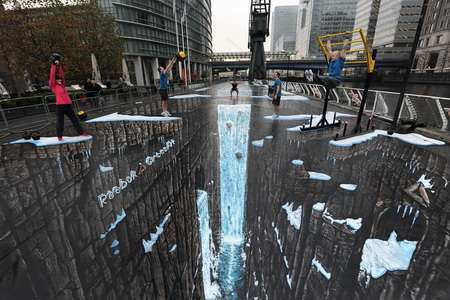 The streets are where the masses congregate and if you have a limited budget to use for ad campaigns, you should make sure you are using out-of-home advertising. As Steffan Postaer stated in his Forbes article regarding outdoor advertising, "With Altoids, we took a tiny, virtually unknown confection and turned it into the number one selling mint in North America, all without making one single television commercial." Simply put, it is cheaper and easier to get your ads seen by as many people as possible when you use street marketing tactics.

As you can see in the Trend Hunter Marketing Trend Report, there are many different ways to get people's attention through street advertising. One such way is projected publicity where buildings are turned into giant campaign screens. This method really stands out from typical billboards as the projected images can use movement and sound to grab the attention of passersby, making them want to tell someone about it. Without the need to spend money on renting out space and producing billboards, projection ads are much more cost-effective as well.

For a more permanent type of out-of-home advertising, you may want to consider guerrilla graffiti campaigns such as the Converse 'Just Add Color' project where they hired graffiti artists to spray paint images of their shoes all over city streets in Europe. This example of street artvertising captures people's attention through the use of bright colors and creative designs, and it appeals to many consumers because they don't feel as though they are being advertised to.

People are constantly commuting, stuck in traffic, waiting in line or just walking around. If you employ out-of-home advertising in a creative and attention-grabbing way, your business has the potential to cut costs and increase consumer base.
References: trendhunter, trendreports

Projected Publicity
Marketers turn to large-scale, low-cost mediums to get their message across