Rejuvenating the Essence of Elementality 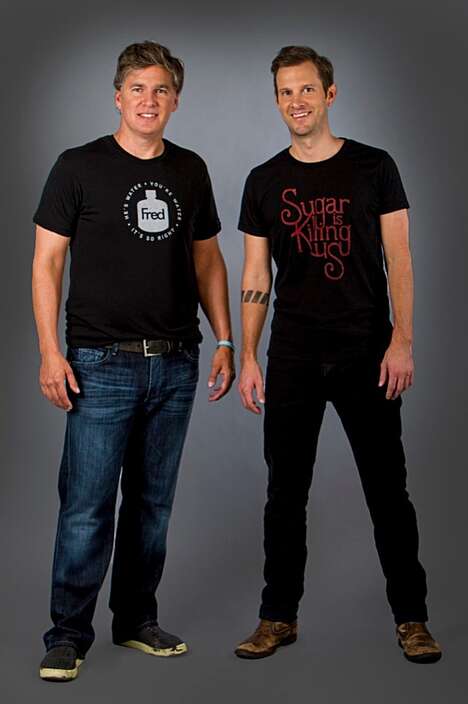 Water is a quintessential component to every human being’s sustenance. Yet, despite its functional significance, it has often taken a backseat to products and brands with seemingly more lustre, appeal and personality. The way in which water is perceived within the discussion of other beverages – boring, plain and lacking in character – has often led to it being skewed by marketers, athletes and celebrities looking to embellish it to a higher status beyond its natural element.

In an attempt to reinvigorate water’s essentiality to our wellbeing, Fred Water aims to portray itself as a friendly, approachable and unpretentious option that treats water for what it is. Adam Gayner, the CEO and Co-Founder, alongside Creative Director and Co-Founder Ariel Broggi, began Fred Water in 2005 with the vision of making water accessible again while putting an unexpected and counter-cultural spin to it. For one, Fred Water is named after a human being and not a product feature – Gayner and his team looked through baby name databases and discovered that it was not a popular name – in order to literally instill personality into the product and to engage people from all walks of life to “defend water,” according to Gayner.

With obesity reaching epidemic proportions in the U.S. – more than one third (35.7 per cent) of adults are obese – there has never been a more crucial time to back the cause of water and foster re-consumption through Fred Water's iconic, canteen and flask-inspired bottles.

1. What’s the vision you had in wanting to simplify water?

We have a point of view about the category and that’s what really got us excited about it. What we saw in the category initially – water is often advertised as coming from this place or that – was not very inspirational. But the irony for us is that is it’s the best thing you can put in your body, and that will never change. You can say all sorts of other things in very specific instances, such as it’s ideal to have some electrolytes or kale in a drink, but water is the basis for everything and we should be drinking more of it. We absolutely came at this from a marketing point of view.

2. How does your team generate new ideas?

It’s in our DNA because we come from a background of branding, marketing and advertising. We use this model of A (audience), B (brand), C (creative) where you think about the consumer and the experiences that they’re having, the brand and the products that exist and the consumers that interact with them, and what’s the message or the creative that’s being said about that product. That was a simple three-step process of dividing out the problem and start going to work on it. What I love to do is work on things where the consumer doesn’t have an immediate problem; in other words, people aren’t walking around saying, “Wow, my water is boring or uninspiring.” Once we put the product out into the market and it solved a problem that the consumers didn’t know they had, it came off as a smart solution, so that’s been our approach to the branding.

3. What makes an innovative culture, and how do you go about creating one?

I think we all have something that fulfils us in our work that we love, and for someone else it’s something totally different, but I think it’s about identifying why you do what you do. When I’m hiring people, if you understand a bit about why their passion ties into their job description, then you can proceed to questions about experience, talent or ability to execute. But I think the why you are doing this is so important. When we see a 15-year-old consuming XYZ drink with 22 spoonful’s of sugar in it, that pisses us off, so that’s why we do what we do. People need purpose.

4. Has there been an instance where another industry has influenced an innovation at Fred Water?

When I see people walking around with a water bottle, it’s always taking up one of their hands. The idea with Fred, which was really a lot more disruptive than we had imagined, was if you’re going to carry this around, why not just be able to throw it in your pocket or your purse. We worked with our consultants to message the idea that Fred is all water that’s potable, rather than just water from a single source. That would open up opportunities and also make us bigger than companies selling just their waters in their bottles. That move from the water in our bottle to all water immediately made people realize that our bottles empty are pretty awesome … When we went into the bottle design at the beginning of the process, we wanted the shape of the bottle to be easy to carry (to give Fred depth), and so we looked at army canteens and pioneer’s flasks and we borrowed from both of those ideas for our category.

5. How is Fred going to be leader in innovation?

I think when we moved Fred from being the water in our bottle to all drinkable water; the possibilities became much more exciting to us. In the future, I think that when we achieve our brand’s goals on a larger scale, we’ll become synonymous with a third option. The first being super cheap, disposable water bottles, the second being luxury premium in the sense of the image also tied to disposable bottles and a third option which is more connected to culture, more relevance, fresher thinking.
References: fredwater

Enhanced Ubiquity
Adding a hint of flavor, cause or theme is enough to turn something ubiquitous