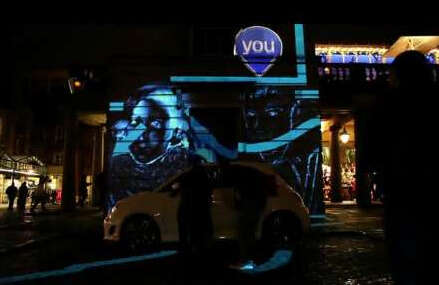 Projected publicity stunts have put many brands on the map without huge cost.

The Darkroom is a company that specializes in creating projected promotions to promote companies like Lancome and Louis Vuitton. To promote their work at the Kimberly Mapping Projections Festival in England, the company showed enormous projections, Pac Man figures and more onto a building, creating quite a buzz for the company's abilities. This kind of publicity stunt has cost advantages, because relatively few materials are needed. Additionally, the campaigns tend to make for eye-catching promotions that not only captivate those who are present in real time, but those who view the stunt later on through commercials and videos posted online.

Aside from being extremely eye-catching, some projected publicity stunts have the added benefit of being interactive. Nokia's Ovi Maps launched in a big way through one of these campaigns, debuting in an interactive projection that actually responded to and mimicked participants' real time movements. This drew even more attention to the projection, and encouraged participants to pay even closer attention to the bold stunt. Aside from encouraging interaction, this stunt also painted Nokia in an innovative light, enhancing the brand's image.

BMW, unlike some of the other examples, actually projected an entire commercial onto a building in Singapore. The size of the projection drew in huge crowds, and made for an extremely interesting piece of promotional content after the fact. After playing the commercial, viewers were encouraged to send SMS messages to a designated account which would then project the messages onto the building as well. This large-scale promotion drew in many participants, and did so in a way that sent a flashy message.

Projected Publicity
Marketers turn to large-scale, low-cost mediums to get their message across