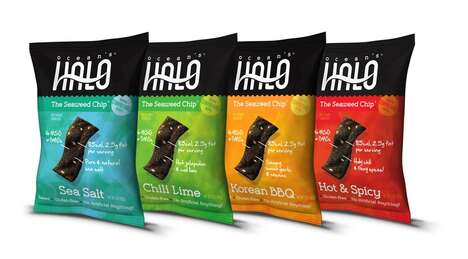 A popular staple food in many Asian countries, seaweed is a culturally infused food item Mike Shim grew up on, but one that he saw largely absent from mainstream American diets.

Talking over dinner one day with a friend, Robert Mock—who was raised eating tortilla chips in Dallas, Texas—the duo decided to combine these two favorite food items to develop the first all natural, nutrient-rich seaweed chip. After discussing the idea with two other seaweed and chip aficionados, the four initially experimented with making the chips in their own kitchens. However, they soon realized that food chemistry was not their strongest suit—their expertise range from technology to finance. The group then consulted with food development group Mattson to develop a sustainably harvested chip made from seaweed.

New Frontier Foods Inc. was formed in 2011, with its first product, Ocean’s Halo Seaweed Chips., launching in late September 2013. At the same time, Ocean’s Halo Seaweed Chips won the “Best of the Press” award at the 2013 Natural Products Expo East, the largest natural, organic and healthy products trade show on the East Coast. Initially sold in six local San Francisco Bay area retails outlets, Ocean’s Halo will now be sold coast to coast at Whole Foods Markets in the Midwest and Northeast regions, Central Market in Texas, at some markets across Canada and on Amazon.com.

Our corporate tag line or model is "swim against the tide." I think that sums up how we think not only about our products but taking on the snack market. If you think about seaweed, it's incredibly healthy and widely consumed in Asia, but it's not so well known here in the States. What's been really exciting is it’s a new food product that's probably got one of the oldest heritages out there, but what we decided was do a different take on it.

Here in the Bay Area, seaweed is everywhere. There are probably 50 different types of brands that are selling pretty much the same product, which are these seaweed sheets. I actually think introducing that basic product, which is eaten pretty widely in Asia, to the States is great, but we wanted to do something that was truly new. We wanted to improve on it and make the product more accessible to the American snacker. When we think about what is our approach to innovation and creativity, we're always thinking about doing or introducing something that is new to the consumer, and not simply trying to catch a wave or catch a trend. These seaweed chips, as far as we know, don't exist; they're new to the world and what we tried to do is take this base product—the category of seaweed is on fire—and put a spin on it.

2. How do you see the growth of seaweed in the market?

If you take a look at the snack aisle today, it's already evolving towards healthier alternatives. I would say that the trends you're seeing right now in the snack aisle are that generally the snacks are becoming healthier … I think the second big trend that you're seeing is snacks that are made from different ingredients. Snacks, and chips in particular, are based on potatoes, corn or wheat, but we’re starting to see other options in the market and in the snack aisle; chips that are made from lentils, beans, kale and other different types of options.

What we're trying to do is introduce more options for the consumer because I think that's what consumers are looking for. They're looking for more options because as much as someone may love eating cheese puffs or potato chips, increasingly those people want to try something new as well. The third is that it's part of a healthier option, but really, I think it’s companies that are taking a more sustainable approach to these types of products.

3. Has there ever been an instance where another industry has influenced an innovation at your company?

One of the compliments we get a lot from people is our packaging, which we had this awesome marketing agency help us with. We started designing the packaging and the website at the same time— which I think is not typically the way things are done in big food— as we wanted to make sure that we had consistency of appearance because digital is so important to building a brand and creating awareness.

We wanted to advantage ourselves by making sure that if someone in the snack aisle saw our package on the shelves— that if they sat down in front of their computer and one of their friends 'Liked' Ocean's Halo— they would instantly recognize that. Vice versa, if that same person started in Facebook and saw this 'Like' on an Ocean's Halo Seaweed Chip bag, the next time they were in the supermarket and browsing the snack section, we would instantly become recognizable … I've heard now several people telling us that the packaging is just really beautiful, and that stands for itself and also helps us in building this larger brand that people can really engage with. I'd say design has been something that we've been leveraging to give us an advantage up there in the market place, because an average supermarket has 10,000 unique units, and as a consumer company, you really have to fight hard to get noticed. That's a big challenge in the consumer spaces, to be truly differentiated, and I think having a beautiful bag that is also sustainable and functional helps us to do that. (The Ocean’s Halo bags are made from 100 percent compostable bags produced from wood pulp.)

4. Looking to the future, how is Ocean’s Halo going to be a leader in innovation?

The way I see it, we're in the process of making widely available and telling the world about this first, new-to-the-world product. We're going to get out there, market the hell out of this seaweed chip product and continue doing that for the immediate future.
But not too far away, we think there's an entire category of products that can be built around seaweed because it really is this new trend. If you look at the big food brands, no one's really been spending much time in it. There are no brands that have been built around seaweed yet. We're starting to see them around things like kale chips, for example, so I think there's a category play here aside from our initial product.

If you look at the trends that are happening in the actual aisles in grocery stores across the world, I think people back the companies that are bringing food to shelves and doing that responsibly. That not only means putting healthier products in packages and not compromising on taste, but also that you've really done what you can to be responsible about how you develop, package and distribute those products. If you look at the snowball effect that's happening, right now we're like a small little snowball that's rolling down a really big hill and we've started to pick up speed. If we really do our jobs in having all these different, amazing products, building a brand and staying true to our mission and our purpose, I think it'll be an avalanche. I think it will be a shift in the way that future food companies operate.
References: oceanshalo

Imitation Indulgent
Instead of giving up unhealthy foods, consumers are turning to modifications