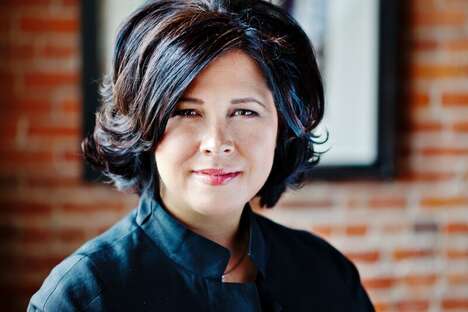 Trend Hunter recently had the opportunity to discuss the 2017 Looking Further with Ford Trend Report one-on-one with Ford Motor Company’s in-house futurist, Sheryl Connelly. Having held the position of Manager of Global Consumer Trend and Futuring at Ford for over a decade, Connelly is tasked with identifying and exploring global consumer trends and behavioral shifts and sharing these insights with the various organization within the company. Now in its fifth year of publication, the report is an annual collection of trends released by the company to the general public.

I know that you are known for your visualizations of some of the ideas that you’ve done, so was it important to you personally to have more integrated graphics to go along with each of the trends?

Oh, I am so glad you asked! Yes, it was, and nobody has talked to me about that. I’m a very visual person, and I think the more complex the idea, the more nuanced the point, the more important it is to have a simple graphic to back it up. I don’t think you can go one way or the other, you need the data or the words to back up some of the images, but I think if you want to reach the widest possible audience, the graphics are really important.

And we’re lucky we have an amazing partnership with a graphic design firm called Haddad & Partners, and they’re a really small firm, but they are global and so the way it works -- let me see if I can get this right -- somebody works on it in Australia, and then hands it over to somebody in France, and somebody in France will work on it until they hand it over to someone in New York. And then to LA, and then Australia. But they literally could work around it so that it’s a collective, with different designers, but we’re very specific about what we’re looking for. We certainly don’t want to read like an annual report, we want people to be able to flip through it and pull out or pause on an image or data point that they find most compelling.

Absolutely. And I think it’s probably more helpful too because they are more high-level ideas that are definitely intersecting in different ways…

Well from a more practical standpoint, I think, and you know this isn’t a theme that’s explicit in our trend book, but the fact that we’re inundated with information and how you navigate through that avalanche of material coming at you. It’s hard and I think this is why infographics have become such a powerful form of communication in recent years.

So I noticed that last year Ford mentioned ‘Time Poverty,’ and this year it’s kind of moved into ‘Time Well Spent,’ and I am wondering, do you see this as a natural progression, or an evolution, in terms of that redefinition of what wasted time actually means?

I do, and if you actually go back even further you’ll see a couple things -- we started talking about the battle between the Fear of Missing Out and the Joy of Missing Out, and we followed that up the next year with ‘The Great Escape,’ and we basically said even when people want to disconnect, learning to escape is being elevated to a fine art. When we started talking about the myth of multitasking and even one of my favorite trends from last year, we talk about meditation going mainstream and I think all of this is part of the same continuum of people trying to just navigate their way through having this onslaught of information available to them but still maintaining their sanity, and so I think focus is a big driver behind the meditation movement right now. People can, in real, meaningful ways, recognize that we just can’t hold our attention and our focus, or carving out time for dethinking, or even just contemplation, is becoming harder and harder, and I think that ‘Time Well Spent’ starts to speak to it. That suddenly, someone says, “yes, I schedule time to daydream, I think procrastination makes my work better, I think surfing the Internet is a good use of my time, taking a nap refreshes me,” and I think it’s kind of exciting to see that conversation taking place.

I agree. Now I kind of see that as leading into ‘Community Ties,’ and I was wondering what you think there -- this re-interest in forming offline communities, whereas that might not have been that much of a first priority even a couple of years ago, do you see a connection between that interest and the desire to take a break and do something meaningful offline?

I do, you know, I think there was this notion when personal computers came out, everyone thought we were going to have paperless offices and it never happened. And then all these mobile digital devices came along, and they said, “all personal action will come to an end,” because you could walk down the hall and ask your colleague something but instead you will email them, and that never happened. And I think right now we see people using technology as a way to come together, but there is no substitute for that personal interaction, and so I think this is why you see a rise in community. We have the Brooklyns of the world becoming super-chic, and I think that’s part of the draw for city living, as well as the rise of co-ops -- things that bring people together to share their affinities.

I like that a lot. Now, there was also a mention of this distrust of institutions and as well, a bit of a pushback toward material possessions... If people are staying at jobs for shorter periods of time, people may be renting or moving more, so do you see that need for mobility culminating in this moment where the concept can be redefined in terms of what it means, which can lead to perhaps, reconsidering the kind of possessions you really want to collect?

Yes, so that actually taps into ‘The Good Life 2.0,’ as well as ‘Deciders Dilemma.’ Let me talk about ‘Deciders Dilemma’ first. If you take the abundance of choice we have in modern times, and pair it against the backdrop of uncertainties, what you have is a whole movement where people are less willing to commit. Nobody knows what the future holds, and so they don’t want long-term commitments. There are young people that don’t want to stay at a job for five years or longer, they don’t want to be held down by a mortgage or a long-term lease, and so what ‘Deciders Dilemma’ really starts talking about, is that this is why sampling of products or services seem to have regained appeal, as well with subscription services.

And with ‘the Good Life,’ if you were of my father or grandparents’ generation, having safe secure employment with a blue chip company for 30 years, what more could you ask for? A great pension, a gold watch upon retirement, financial security for your family after you’re gone -- that was the pinnacle of success. And I think that that’s no longer the inspiration for some people, and indeed one might argue that’s because it’s not accessible anymore, but too, I don’t know if people want it. For the most part, that came with extraordinary sacrifice and at a cost in terms of your personal life, and people thought the trade-off was fair, and now I think people reconsider that, and they say, no, I really need balance between home and work, and this ethos of working to live instead of living to work suggest that people aren’t willing to engage in the blood, sweat and tears that was the dawn of yesteryear. But I think since the marketplace is moving so rapidly, that new opportunities present themselves and young people in particular are really eager to explore those. And it’s nice because the job market has responded appropriately -- it used to be if you showed up to an employer and you had five different jobs on your resume in the same number of years, red flags might have gone off and they might have said, “why can’t they keep one job? Are they unable to produce, what’s the problem here?” and now I think people go, here is someone who has got a broad-based perspective -- instead of knowing how one company did it, they know how to show you how five companies did it. Imagine all that they’ve learned and the richness of insights that they bring with them.

That’s definitely an interesting thought and I hope that is the direction we are going and that it’s something that would be widely adopted soon.

I think so, I see it within Ford. I think maybe five years ago a lot of young people wouldn’t have been as interested in a car company, being within such a mature industry, but now that we are dabbling in things such as autonomous driving and cities as our new customer, and looking at car-sharing, ridesharing, bike-sharing -- people are really excited to be part of the team that’s thinking through the innovations that will enable that.

Now I know the auto industry, like food and beverage, is always working quite far ahead -- often at least five years out, in terms of developing of products. Do you see this Trend Report as an opportunity to meet consumers halfway, or perhaps helping forward these continuously evolving values along?

So with the Trend Report, and it’s funny because I’ve had this role for 13 years now, I often explain to people that when I first started the job, I could never talk about any of this stuff publicly. There was this notion that these insights could eventually lead to a point where they drove our strategy, and proprietary information, you know, “our top secret, secret sauce recipe,” might work its way out and end up at a place it's not supposed to, and being at a place now, a decade plus later, saying, “hey, we’re going to publish something once a year,” and just put it out there, just throw it at the wall and see what sticks is a dramatic cultural shift for us and I think what we’ve learned by doing this is that it gives people some insight into who we are and how we think. I think a lot of people, well from my own personal experience, are always shocked like, “I can’t believe a 100-year-old company has a futurist!” And you might remember a story I told this summer [at the Looking Further with Ford 2016 event], where I said the first time I spoke publicly, someone said “great presentation, especially coming from a dinosaur like Ford.” So I think sometimes sharing this stuff, it helps people see who we really are and it lets go of what maybe their older, outdated or less relevant perceptions of are. But I think there is a great benefit for us as an organization because it lets us talk to people like you, where when we do interviews like this, you’re also giving us insights back. The more we share, the richer our insights get and I think we’re really lucky to have the kind of leadership that sees the benefit of that, who say, “you know what, let’s go out and talk to people who have nothing to do with cars and see what they have to say.”
References: